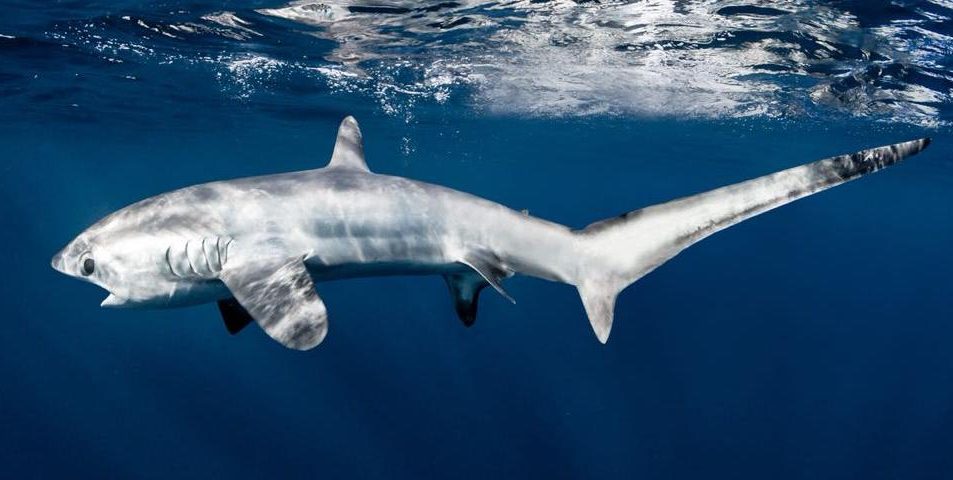 Maintaining Balance: Thresher Sharks and People in Alor – A Story by Harley James

Have you ever heard about this majestic looking shark? Look how beautiful the long tail fin is. The Pelagic Thresher Shark (Alopias pelagicus) or in Indonesia known as “Hiu Tikus” (Mouse Sharks) is the smallest species (3.3 m) out of the 3 other species in the family of Alopiidae and can be identified with its distinctive features such as its long caudal fin, large pectoral fins, small mouth & big eye.

This beautiful species live in open waters and can swim up to 450 m in depth, they usually hunt for food on shallow waters at night by whipping their long tail to shock preys. Unfortunately, this species is listed in IUCN Red List as an Endangered (EN) species where the population declined by 80% for the past 10 years in Indonesia.

The relative probabilities of occurence is represent as red and yellow color. Red indicates more chance of Pelagic Thresher sighting and yellow is the vice versa. As we zoom in to Indonesia, we can see the color red is concentrated that indicates more chance of sighting, especially in the eastern waters of Indonesia, where most of marine biodiversity of the country’s located. Sadly, Indonesia is considered as the largest shark fishing nation with shark catches averages around 100,000 tons per year. [Click here to continue reading]