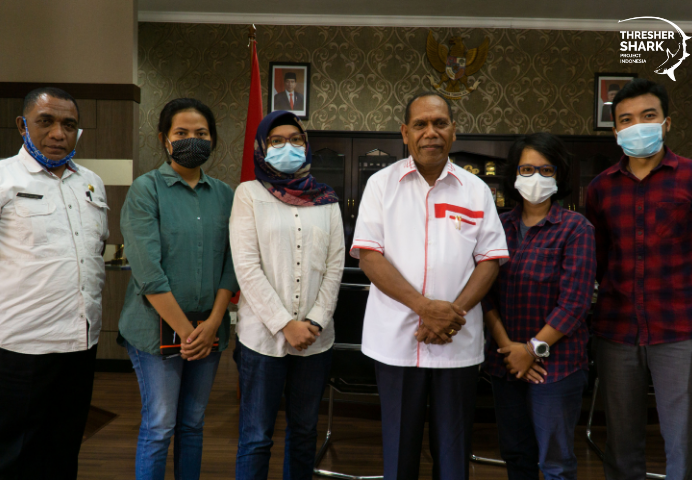 Thresher Shark is one of the shark species that is now included in the IUCN (International Union for Conservation of Nature) red list. Even though it is listed as a circum global animal, or could be found almost around the world, the consistent existence of thresher sharks can only be found in diving activities in Malapascua, Philippines. However, thresher sharks often show up in the Indonesian waters and are sold for their meat and fins. According to the activities by the Thresher Shark Indonesia team in 2018-2019, one of the regions where they are often seen is in Alor, Nusa Tenggara Timur.

On September 16th, 2020 the Thresher Shark Project team will continue the activities and will work in Alor for the next year. Four team members came back to Alor, Nusa Tenggara Timur,  continuing the 2020 mission, which one of them is to work together with the local government, helping conservation efforts of thresher sharks through conservation policy.

During the meeting which was held in the office of Amon Djobo he addresses three important things. First, the Thresher Shark Indonesia 2020 work programs are expected to help develop the Alor local communities, especially fishers. Second, he also expressed his full support to the Thresher Shark Indonesia team in working together in the development of local communities.

In this opportunity, the Thresher Shark Indonesia team also met up with the Regent Secretary of Alor as well as the head of Law to discuss local enforcements and also the Launch of the Yearly Work 2020 which will be held on September 22nd 2020 in the regent’s office.