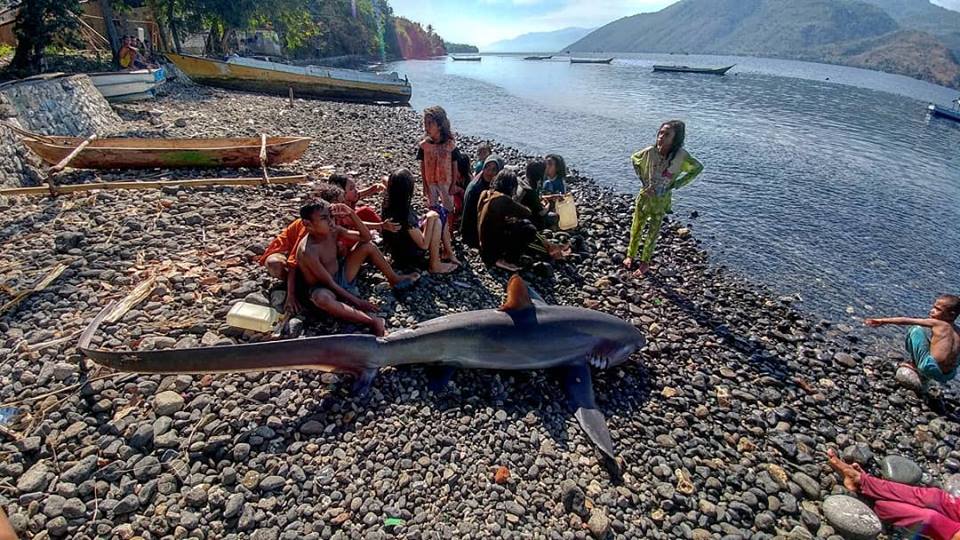 Our goal is to stop the mortality of Thresher sharks in Alor, whilst improving the livelihoods of the communities in the area.

We have developed a proposal via the Shark Conservation Fund to continue our work from last year and establish a local conservation policy for Thresher sharks.

We are hoping to create a pilot example of creating a policy that will not hurt local communities. The new policy needs to be something that is fully embraced by all layers of Alor communities, and not only benefit a select few.

We are also planning to establish the first acoustic telemetry network in some of the identified Thresher shark cleaning stations. This will aid in long term monitoring efforts, and enhance the function of the current local MPA in Alor.

How did this project start? What made you decide you want to focus on the conservation of Thresher sharks?

Thresher shark populations are drastically declining worldwide, yet still not much is known about the species. We are the first project in Indonesia that focuses on Thresher shark conservation.

The initial idea for this project came about after we had been informed that there were a significant amount of pregnant Thresher sharks being caught in Penida, Bali. The community there had a strong resistance towards shark conservation work and thus it was not an ideal place to base our project – as our work was not welcomed. Our partners, Shawn Heinrichs, and Sarah Lewis informed us that there was another small community in Alor who was also catching pregnant thresher sharks. The liveaboard Silolona had already been in contact with the shark fishing community there and was working with the fisherman by giving them incentives to not catch Thresher sharks. This early engagement by Silolona provided us with an introduction to the community along with the opportunity to get involved and develop a more comprehensive shark conservation project – and thus Thresher Shark Project was born.

Our project was initially funded by the Conservation Leadership Programme. In our first year of operation, our work focused on community engagement amongst the shark fishers of Alor, whilst trying to find and pilot alternative income solutions, whilst investigating into the critical habitat of this species and the socio-economic importance of Thresher sharks to this area. We also initiated some conservation outreach programs to local schools.

What are some of the accomplishments the project achieved in the last year?

We are very proud of the level of engagement and relationships we have been able to build with the shark fishing community in Alor, as well as with other key stakeholders in the area such as tourism operators and the local government. Before Thresher Shark Project, the Alor local government was unaware of the presence of Thresher sharks in their waters, and research on this species in this area was almost non-existent.

We were able to conduct the first satellite tracking study for this species in Alor. We also documented the areas in which Thresher sharks were typically being sighted through the help of local dive shops. Our pioneering research has led us to believe that the region of Alor is an area of critical habitat for this species. Our research indicates that there is a possibility of an important migration corridor and cleaning station in the area used by Thresher sharks.

We shared our findings with local stakeholders, including the Alor regional government. Impressed by our findings and commitment towards conserving this species whilst benefiting the community, the regional government proposed to establish a new policy that involves alternative livelihoods for the community. The shark fishing community has been extremely welcoming, collaborative, and eager to work together to develop this project. We feel that there is great potential to establish effective policy in Alor towards conserving Thresher sharks at the local level in Alor, whilst mitigating negative outcomes for the shark fishing community through engaging them in all aspects of policy establishment.

What were some of the challenges during the implementation of the project?

Lack of personnel and team members in the field was an issue we struggled with initially. We didn’t have enough volunteers or resources to be able to capture and document valuable data throughout the whole year. Towards the end of the year, we got more team members on the ground full time and this allowed us to improve our implementation of required tasks. More people on the ground allowed us to also build a much stronger and trusting relationship with the community.

Can you introduce some project aspects/initiatives?

This year, we have recruited more team members to help us with project development, implementation, and citizen science. We have expanded our social media and website team in hopes to create more awareness about the plight of Thresher sharks in Indonesia and to update people on our ongoing work.

We are aiming to develop a more innovative business model by engaging social enterprises to help raise funds to support our work. We also hope to be able to sell some marine conservation merchandise in the future to help spread our message to a broader audience.