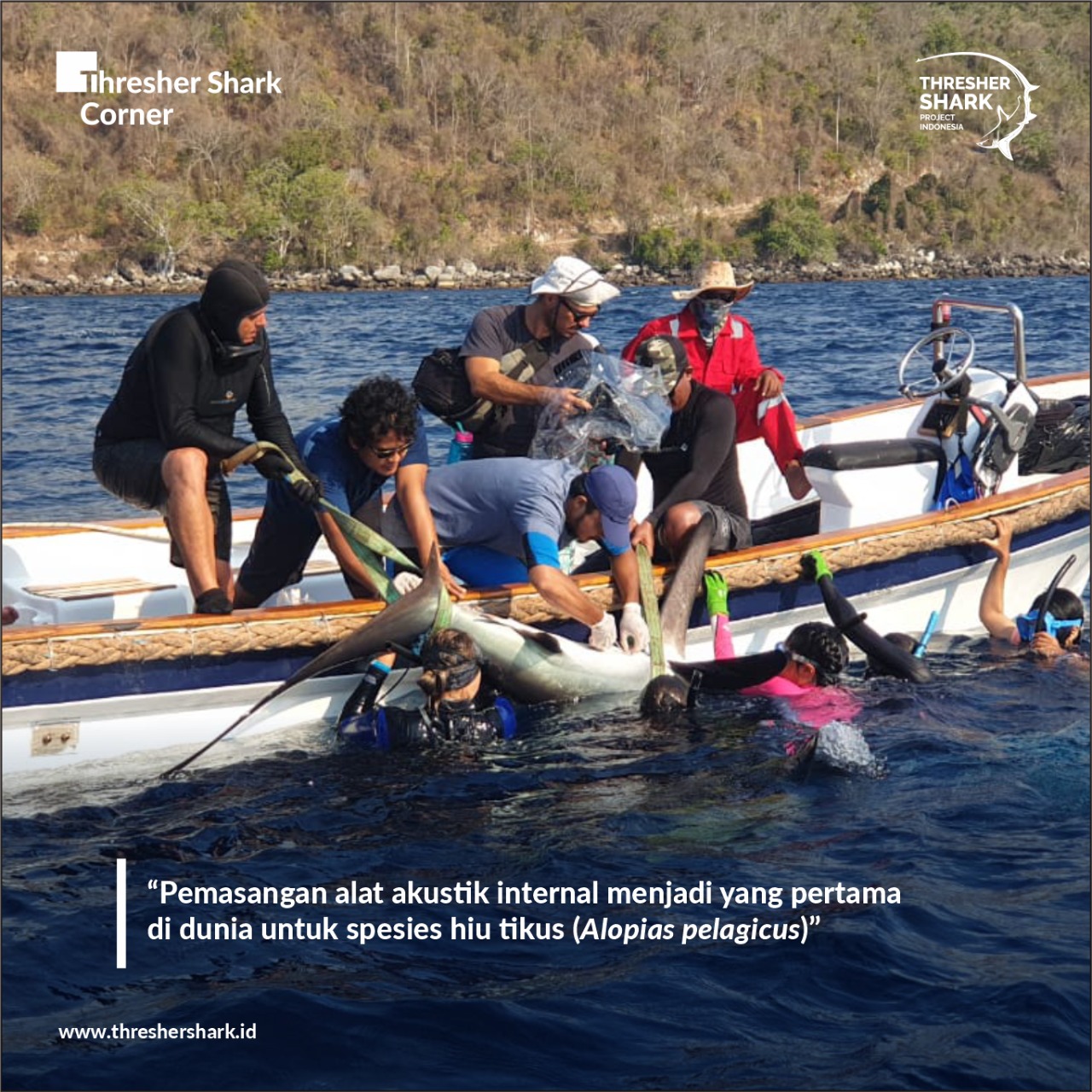 The Mounting of Internal Acoustic Tag on Thresher Sharks, the First One in Indonesia and the World

On September 25th 2020 –  Oktober 10th 2020, Thresher Shark Indonesia, with the support of Ocean Blue Tree, through the Samambaia Liveaboard expedition, Thrive Conservation, and Underwater Tribe mounted the MiniPAT satellite and Internal Acoustic Tag on Thresher Sharks as well as receivers around Alor, Nusa Tenggara Timur.  Research on thresher shark (Alopias pelagicus) using this internal acoustic is the first one in the world, and the first-ever using the MiniPat satellite in Indonesia.

The mounting is a part of research conducted by Thresher Shark Indonesia. The purpose is to learn the migration pattern, habitat, as well as the habit of Thresher Sharks which are now endangered and to push conservation efforts in the Alor waters and Indonesia.. The MiniPAT satellite tag which are on the Thresher Shark’s body has been programmed for 6 months and will deploy automatically to the surface. The deployed tags will then give signal to ARGOS satellite with the data summary of depth and their locations of movement.

The conservation efforts of Thresher Sharks (Alopias pelagicus) themselves started since 2009 through IOTC Resolution 10/12 in the year 2009. In addition, in 2016, Thresher Sharks were agreed to be listed in the Appendix II of the Convention on International Trade in Endangered Species of Wild Fauna and Flora (CITES) during the 17th Conference of the Parties in South Africa. This Appendix II list contains the animals that are threatened if the trade keeps going on without any rules or regulation. Unfortunately, only 3 years after Thresher Sharks were included on the list, of Cites Appendix II, in 2019 they are now in the status of Endangered according to the The International Union for Conservation of Nature (IUCN) Red List of Threatened Species. In Indonesia, Thresher Shark has been included in Pasal 73 Peraturan Menteri Kelautan dan Perikanan No. 30 tahun 2012 and Peraturan Menteri Kelautan dan Perikanan No. 26 tahun 2013 about Fisheries in WPP NRI which they have to be released and reported if dead, as well as in Bab X Pasal 39 Permen KP No. 12 tahun 2012 about fisheries in the open ocean. However, it is very unfortunate that Thresher Sharks (Alopias pelagicus) is often still the bycatch by the tuna fishery in Indonesia.